In 2012 the River Ythan Trust undertook the first comprehensive habitat survey of the River Ythan. The Trust commissioned the River Don Trust to carry out 300 km (187 miles) of habitat survey, the remaining 100 km (63 miles) was carried out by volunteers from the Trust.  Each waterway was surveyed down to a width of 500 mm (20 inches).

The information discovered and recorded during this survey provides all the habitat data regarding the Ythan and its tributaries. The data has been used to make significant improvements to the habitat and fishery.

The survey was primarily concerned about the quality of the habitat within the river and tributaries to support salmon. The survey recorded potential spawning sites, salmon fry habitat and salmon parr habitat.

Juvenile salmon, both fry and parr, require shallow fast riffles to develop before migrating to the sea as smolts.   Suitable habitat for juvenile salmon was found to be scarce, mainly due to historical modifications of the waterways over the last several centuries.

Poor juvenile salmon and trout habitat, tunnel vegetation (trees) has reduced light reaching the river causing it to become very wide and shallow – no variation in the riverbed habitat.

All waterways in the Ythan catchment have to some degree or another been affected by historical straightening.  This reduces the quality of habitat for both salmon and trout, especially salmon.

From this point downstream to Fyvie some 8 km (5 Miles) due to straightening and dredging, only some 100 m (110 yds) of juvenile salmon habit exists.

Ythan Main Stem upstream from the Tifty Road Bridge at the top of Fyvie Estate Policies. Juvenile fish habitat totally destroyed in the past by dredging and canalisation.

The survey also recorded trout habitat information. Fortunately, trout are less sensitive to the conditions in the beds of the river and tributaries and can survive provided the water quality is good and were found almost everywhere in the Ythan catchment.

Trout do not have the same need for fast shallow riffles as juvenile salmon, provided there is enough gravel present for spawning, they can reproduce. Trout are more content to occupy slower water including glides and pools.  In many cases the habitat was found to be poor, however trout were still seen in the smallest of waterbodies.

This small pool on the Tifty Burn near the Mill of Tifty, Fyvie, contained large numbers of trout

A tiny pool on the Buckie Burn about 1.3 km above the mouth – a most inhospitable habitat, yet the survey recorded a single small trout in it.

Both salmon and trout, including the anadromous (fish born in freshwater who spend most of their lives in saltwater and return to freshwater to spawn) trout and sea trout, need to be able to swim upstream to reach their spawning gravels and useful habitat for juvenile salmon and trout.

The habitat survey discovered that obstacles and part obstacles were widespread and numerous. The survey found 362 obstacles throughout the catchment.

The survey recorded relatively few manmade obstacles, some were found on the Bronie Burn, Kelly/Keithfield Burn and the Fordoun Burn.  However, the survey did find livestock watering stations in the catchment area.

The manmade Scottiesly Weir, following a later investigation this proved to be a significant obstacle to upstream fish migration in low water conditions – in high water conditions is passable.

Manmade weir on the Kelly Burn in Haddo Country Park. Subsequently provided with a fish pass by the River Ythan Trust/Aberdeenshire Council in 2014.

Major debris obstacle on the Red Burn, a tributary of the Fordoun Burn. Subsequently cleared by River Ythan Trust Volunteers.

Debris gathered on an old farming structure in the Keithfield Burn.

Livestock watering station collecting debris and causing an obstacle on the Forvie Burn.

Animal faeces damage the water quality and silt clogs up gravels fish use for spawning. Excessive amounts of silt increase the amount of macrophytes (aquatic weeds emanating from the beds of streams) thereby reducing the amount good habitat available for juvenile salmonids. In addition, many livestock watering stations cause obstacles to fish migration.

The survey found 373 livestock watering stations, one for every 600 metres of waterway.  These stations did not comply the Scottish Environment Protection Agency (SEPA) General Binding Rules to prevent silt and faeces entering the water.

Livestock watering station on the Little Water – no restrictions made to keep animals out of the stream.

Poor livestock watering station visible in the foreground and no livestock fence on the other side.

Livestock watering Station on the Asleid Burn – a tributary of the Little Water.

Livestock crossing on the Tifty Burn. Diffuse pollution has affected the stream for several hundred metres downstream. Excessive macrophyte growth can be seen.

No restrictions visible to stop livestock entering the river.

Tunnel vegetation from bankside trees can damage the habitat for fish.  However this is not a large problem on the Ythan catchment.  The survey identified and recorded some 8.7 km (5.4 miles) of tunnel vegetation mainly on the Ythan main stem, Auchmacoy Burn, Bronie Burn, Kelly/Keithfield/Raxton Burns, Stonehouse Burn and the Fordoun/Red/Black Burns.

By 2012 when the survey was carried out there was more interest in the number and location of invasive non – native plants, especially Giant Hogweed, Japanese Knotweed and Himalayan Balsam.

Giant Hogweed was found to be the most common and widespread of the invasive non-native plants. It was present in over 80 km (50 Miles) of waterway banks. Japanese Knotweed was much less common, only 6 or 7 locations - Himalayan Balsam was found only on the lower reaches of the Foveran Burn. 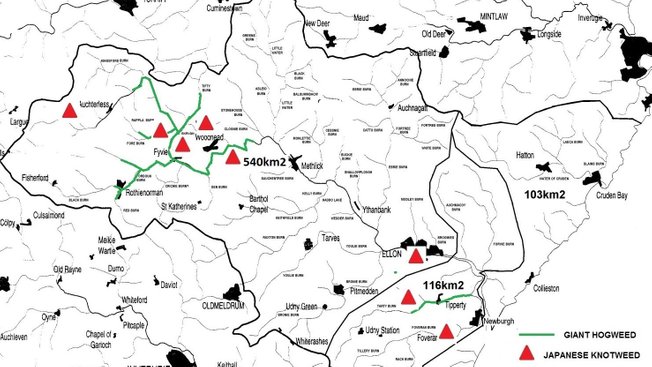 Giant Hogweed seed heads from the year before the survey.

About 5km above Methlick, Giant Hogweed coming into flower.

The plant also existed in the margins of some slow pools in the Ythan from Methlick downstream to Ellon but does not seriously affect the flow of the river.

Another aquatic plant (not an invasive non – native species) that causes a problem is Water Crowfoot (Ranunculus) which is a translocated species and is present in the Ebrie Burn and from there, in the Ythan downstream to the top of the tide in Ellon. Some years, dense stands overwhelm the riverbed, accumulating silt and possibly impacting salmon and trout spawning beds.

Canadian Pondweed on the Ythan

The Ythan District Salmon Fishery Board is a member of Fisheries Management Scotland.